In Latvia similar number of emigrants and immigrants registered

The data compiled by the Central Statistical Bureau of Latvia (CSB) show that at the beginning of 2022 population of Latvia accounted for 1 million 876 thousand people, which is 17.5 thousand people fewer than a year ago. “The population decline recorded over the past year may be compared to the number of people currenty living in Salaspils and is caused by natural decrease, i.e., notable prevalence of deaths over births, and not by migration as prior,” says Baiba Zukula, Director of Social Statistics Department.

Last year population declined more sharply than a year before – by 0.92 % and 0.76 %, respectively, of which a drop of 0.91 % was due to natural decrease and of 0.01 % due to migration. Along with the increase in the number of Ukraine citizens who have applied for temporary protection in Latvia, the positive migration dynamics may be expected also in future.

Natural decrease registered over the past five years exceeded the negative difference in migration flows significantly. Moreover, the trend was growing last year, during COVID-19 pandemic when death rate went up, especially in January and autumn months.

Last year, mortality exceeded birth twice – 17.2 thousand people more died than were born (difference of 11.3 thousand in 2020), moreover it is the most significant natural decrease since 1995. On the other hand, due to long-term international migration population declined by only 286 people, which is the lowest indicator recorded since Latvia regained its independence.

Significant upturn in immigration, downturn in emigration to CIS countries

Remigrants, i.e., citizens or non-citizens of Latvia as well as inhabitants having different citizenship but born in Latvia, accounted for almost 7 thousand or 54.8 % of the immigrants coming to Latvia in 2021 (4.7 thousand and 53 % in 2020). People prior legally not related to Latvia formed the rest part of the immigrants.

The slight birth rise recorded between 2013 and 2016 resulted in larger population of children and young people, however since 2017 birth rate is reducing, and in 2021, compared to 2016, 4.5 thousand children fewer were born. Last year, population of children aged 14 and under declined by 2 986 people, however its share in the total population has been 16.0 % for three consecutive years  Population aged 15–64 kept declining – by 12.4 thousand or 1.0 %. Unlike in previous years when elderly population was increasing, last year number of inhabitants aged 65 and over dropped slightly – by 2.1 thousand or 0.5 %, however their share in the total population grew from 20.8 % to 20.9 % over the year. Mean age of Latvia population is 42.9 years. In regional breakdown it varies between 40.7 years in Pierīga and 45.1 in Latgale.

At the beginning of the year, before increase in the number of immigrants having citizenship of Ukraine, their number constituted 6 371 or 0.3 % of the total population of Latvia.

More than a half (53 %) of the total population lived in Riga and Pierīga. However, over the past years inhabitants of the capital tend to move to Pierīga.

Almost 606 thousand people live in Riga, which is 32 % of the total population and 47 % of the urban population. 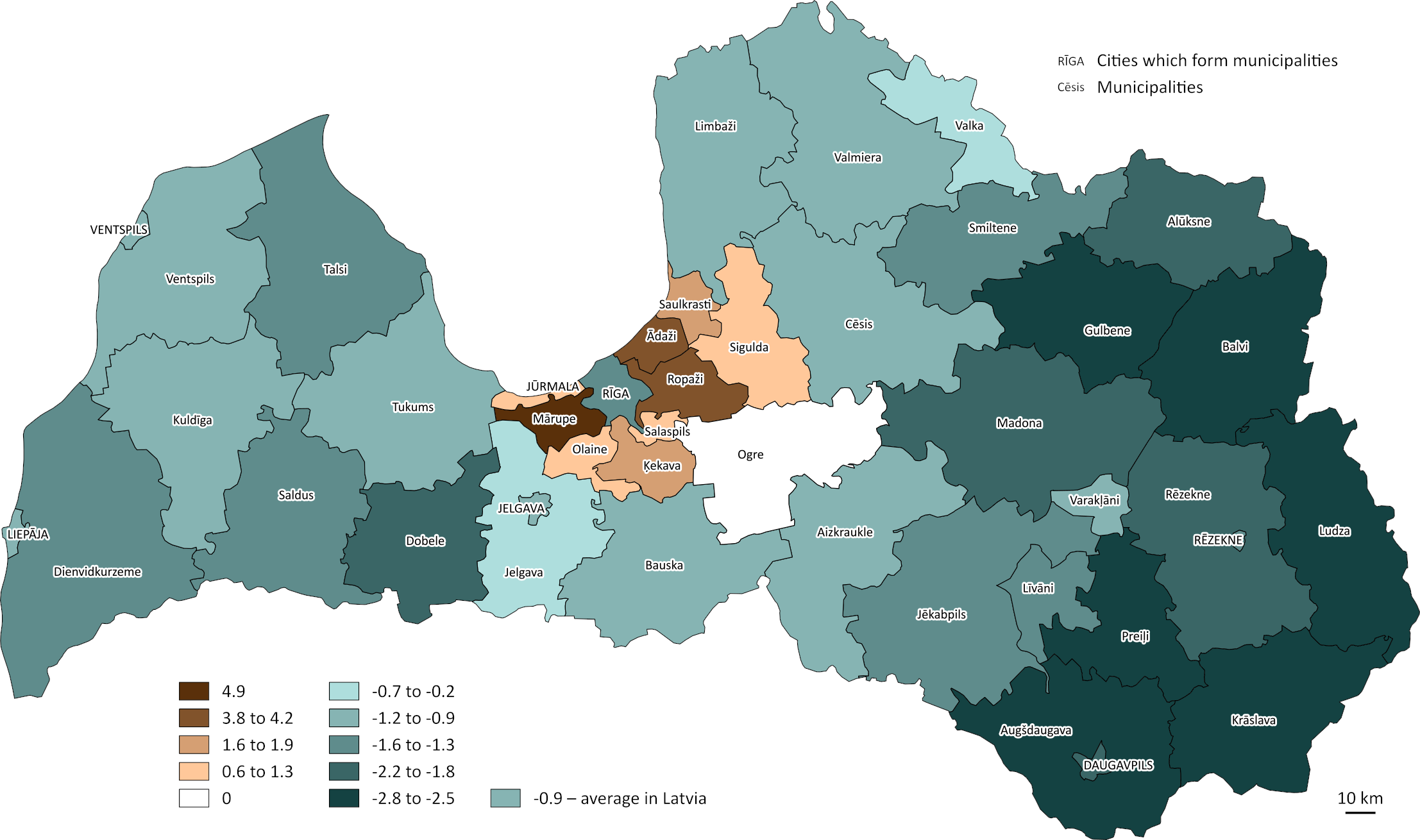 Pierīga was the only region in which increase in the number of children aged 14 and under was observed (of 1.6 % or 1.1 thousand). The sharpest decline in children population was registered in Latgale (of 2.6 % or 0.9 thousand) and Riga (2.2 % or 2.1 thousand). The largest share of children and young people (aged 0–14) was recorded in Pierīga – 18.8 % of the total population in the region, whereas the smallest in Latgale – 13.6 %. Share of children in cities varied between 18.4 % in Jelagava and 14.6 % in Dagavpils. Mārupe was the youngest municipality with 27.3 % of children aged 14 and under in total population, whereas Krāslava and Augšdaugava had the smallest shares of children – only 11.3 % and 11.8 %, respectively.

Annual population estimate was drawn up based on the data in the Register of Natural persons of the Office of Citizenship and Migration Affairs and other administrative data sources.

Statistics on administrative territories meets the provisions of the Law on Administrative Territories and Populated Areas in force as of 1 July 2021.