Since the previous census in 2011, when the population was surveyed at their registered residence, their number has decreased by 177 thousand. This is the total approximate number of population in the three large cities together - Daugavpils, Liepāja and Rēzekne.

Last year, the lowest birth rate in the last hundred years was registered

Last year, 17.6 thousand children were born in Latvia - by 1 234 or 6.6 % less than in 2019, which is the lowest indicator over the last hundred years, whereas 28.9 thousand persons died - that is by 1 135 or 4.1 % more than in 2019. Compared to recent years, mortality increased sharply in November and December 2020. Last year, 11.3 thousand more deaths than births were registered (in 2019 - by 8.9 thousand), and this is the largest indicator of negative natural growth since 2005. As a result of long-term international migration, the population, in turn, decreased by only 3.2 thousand, which is the lowest indicator since 1989.

In 2020, 4.7 thousands. 53 % of immigrants were re-immigrants - citizens and non-citizens of Latvia, as well as residents whose nationality is different, but the country of birth is Latvia (in 2019 - 5.1 thousand or 46 %). The remaining part was made up of immigrants who have no legal xommitment with Latvia.

Population ageing still observed, the average age of the population is 42.8

Number of Latvians has decreased by 0.4 %

In 2020, as a result of negative natural growth, the population of all major ethnicities of Latvia decreased: Belarussians - by 2.4 %, Poles - by 2.0 %, Russians - by 1.6 %. The number of Latvians has decreased by 0.4 %, but their share in the total population, despite the decrease in the absolute number, increased by 0.2 percentage points and at the beginning of 2021 was 62.7 %.

Almost half of Latvian males are married, females - 41 %

Population is growing in 15 Pierīga and in four other counties

More than half (52 %) of the country's population lives in Riga and Pierīga. In recent years, there has been a trend that residents of the capital often move to the Pierīga region.

In 2020, in 19 counties out of 110 the number of population increased, and 15 of them were Pierīga counties. Outside Pierīga, a very small increase in population (by 1–4 persons) has been observed in Nīca, Rucava and Skrīveri counties. Larger increase – by 35 persons more than a year earlier was registered in Strenči county mainly due to domestic migration from Riga and Valmiera. In all counties, except Sigulda county, there was a positive net migration, whereas a positive natural increase was registered in 9 counties. The largest increase in population was in Stopiņi county (5.5 % or 638 persons). 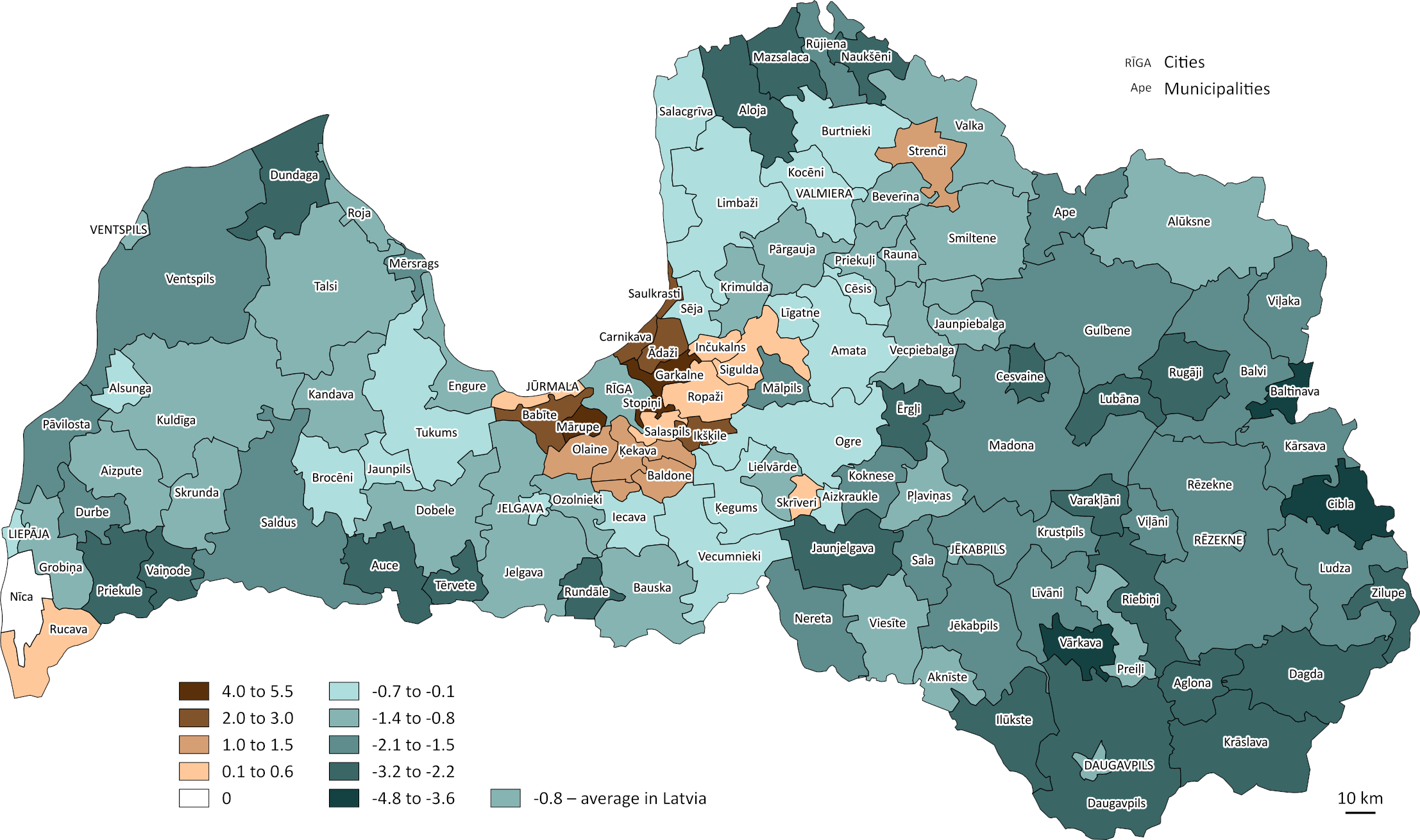 As a result of the new territorial reform, instead of 110 counties, there will be 35 counties in Latvia. In terms of population, the largest will be Ogre county - 57.6 thousand and Valmiera county - 51.4 thousand, whereas the smallest one - Valka county with only 7.6 thousand inhabitants and Saulkrasti county - with 9.2 thousand. Last year, the population increased in seven new counties (Mārupe, Ropaži, Ādaži, Ķekava, Saulkrasti, Olaine and Salaspils). Five of them also had positive natural growth, but immigration was the main driver of population growth.

32 % of population in Latvia live in Riga

Since 2020, data have also been published on 58 Riga and 27 Valmiera neighbourhoods. Most Riga residents live in Purvciems - 54 thousand, and there are 41–45 thousand inhabitants in Ķengarags, Imanta and Pļavniekieki.

The number of children under 14 years of age in 2020 increased by less than a thousand only in Pierīga, but decreased the most in Riga - by 1.8 thousand. The largest share of children and adolescents was in Pierīga - 18.8 % of the total population of the region, the smallest one - in Latgale - 13.7 %. In the cities, the share of children ranged from 18.2 % in Jelgava to 14.7 % in Daugavpils. The county with the youngest population was Mārupe county - 28.6 % of all residents were children under 14 years of age, but in Aglona, Zilupe and Baltinava counties - only 10.3–10.8 %.

Latvia has the largest population decline among the Baltic States

In Lithuania, in turn, the preliminary population at the beginning of 2021 was 2 million 795 thousand (population growth - 1.1 thousand) Lithuania also had a negative natural increase of 18.9 thousand, whereas a positive net migration of 20.0 thousand2 The population of Lithuania remains stable.

2 Website of the Lithuanian Department of Statistics (Statistics Lithuania)

With the publication of demographic data, the CSB starts transferring the 2021 Population and Housing Census indicators to data users. Unlike previous censuses in 2021, only the information available in administrative data sources is used, completely abandoning the survey of the population on the Internet and in their residence.

The annual population estimate has been prepared using data from the Population Register of the Office of Citizenship and Migration Affairs and other administrative sources.

Information on the population of administrative territories at the beginning of 2021, as well as data on the main demographic indicators are available on the Official statistics portal in the section “Population”. This year, the indicators characterizing the population have been supplemented with new statistics on the population by the year of arrival in Latvia and the residence of the person a year before the census.

Data are also available for densely populated areas (accommodation or workplaces where at least 50 permanent residents live or work in buildings, not further than 200 m apart). It is an alternative indicator to the existing administrative territories and territorial units - towns and villages - to ensure comparability. In turn, this summer the indicators characterizing the population will be available in a 1 km2 network.

The CSB is starting to publish population estimates by their registered residence. Currently, data on the number of inhabitants by registered residence in 2020 and early 2021 are available. Data from previous years will also be gradually recalculated. Statistics are published in administrative territories in accordance with the valid classification of administrative territories and territorial units, which is published in the section “Classification” of the CSB website.