SIMS 2.0 is the ESS standard for quality and reference metadata, which describes the processing, availability and quality of statistics from different aspects.

The statistical population includes all residents of Latvia according to the following definition:

Persons living in Latvia or having an intention to live for a period of at least 12 months are considered to be usually resident population.

Population and its characteristics in the EU countries

Quality control of the estimate is ensured by using the following data:

Data on population births and deaths are acquired from the System for Registration of Civil Status Documents (in latvian - CARIS) of OCMA. The system is a common information system allowing to register civil status in any registry as well as continuously ensures availability of topical and reliable register information in any registry, General Registry Department of the Ministry of Justice and OCMA.

Information is acquired with a full-scope survey. It means that sampling method is not used to produce demography statistics.

Description of method in PDF

Determination of the registered residence in Latvia (since 2020)

Since Population Census 2011 for all persons included in the population estimate, both actual and registered place of residence is determined.

Registered place of residence is determined on several stages:

For children aged 15 and younger (except for those living in institutional dwellings), a fact whether also any of the parents is registered in the dwelling is verified. If child is registered alone (without any of the parents), his/her addressing object code is changed to that of a mother (if mother does not have one, to that of a father). Address of a child is changed to the dwelling address of parents also if child is registered with another adult, e.g., grandmother, as in line with the UN Population and Housing Census recommendations family (family nucleus) is formed by family members of two consecutive generations (children and parents). Addressing object code of a child is not changed to that of a parent if population estimate method allowing to conclude that any of the parents lives abroad.

Within the second stage of determining registered place of residence, the people living in private dwellings are broken down into families with the help of family nucleus analysis algorithm. After dividing persons into families, residences of separate people are adjusted by changing addressing object code of a female living separately to that of a dwelling in which her husband lives together with common children aged 0–15.

This adjusted database is supplemented with persons the address codes whereof do not meet the population group “family” defined in the Population and Housing Census methodology, i.e., people living in institutional dwellings, people living in houses not separated into apartments, as well as single people (not having spouse, parents and children) not having addressing object code and residence place whereof is known only at municipality level. In line with the updated addressing object code-CATTU transition table, registered residence of each person is defined at the level of municipality rural territory, city and municipality.

Determination of the actual place of residence in Latvia (until 2019) 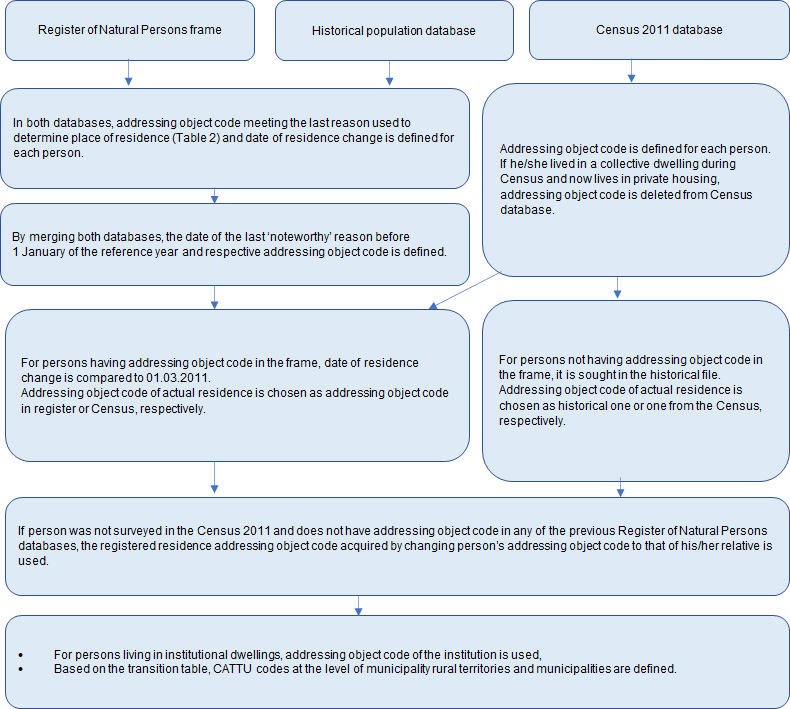 Verification of changes in addresses is made in case of alterations of administrative boundaries, and CSB information on uninhabited housings and those having status of collective dwelling is verified as well. Based on the updated addressing object code-CATTU transition table, actual place of residence of each person at the level of municipality rural territories and municipalities is determined.

Citizenship, ethnicity and country of birth

In the database, indicators of country of birth and citizenship with a mark EU- 27 indicate the composition of the EU-27 in 2020, after the withdrawal of the United Kingdom.

Country of birth, ethnicity and citizenship indicators are published only in case there are at least 10 inhabitants.

Life expectancy. Data on life expectancy of population are acquired with the help of calculations based on the CSB information on population mortality, average annual number of usually resident population as well as sex and age structure of the population.

Life expectancy estimates are based on crude, male, and female death rates in breakdown by five-year age groups (number of deaths per one resident of the respective gender and age). Until 2000, age of the person at death was calculated according to the birth or calendar year (death year minus birth year). As more statistical information is available, since 2000 the age of the person passed away is calculated in full years (from the birthday until the day of death). Starting from 2000, the death rate and life expectancy statistics calculations are based on the age of the person passed away in full years. The life expectancy estimates are made by using the R software library MortalityLaw.

Changes of the permanent residence of the population. When publishing data on the network after changes in the population's place of residence compared to the previous year, the data are obtained by relating the number of people who have moved to the total population in the network cell (excluding the persons for whom it is not known whether they have changed their residence as well as the persons for whom this indicator is not applicable: i.e. persons born during the previous year).